THE LARGEST FRENCH GENETIC HERD IN THE UK, PERFORMANCE RECORDING BY LA LIMOUSINE

Purchased at The Royal Show Sale 1976 with heifer calf at foot; retained until her death at 20 years of age, having produced a calf every year of her life from the age of three.

Bred by M Imbert, Bellac, France, she was among the first Limousin importations to the UK.

She’s had a huge influence in the Grange herd and with the exception of French importations, almost all the entire herd can be traced back to Imbattable.

Mapledurham Naomi – one of the first females to be flushed in the UK. Mother of Grange Aphrodite and Grange Adonis, both by the famous Favori. Grange Adonis was retained as senior herd sire until his death, producing very correct progeny, with growth and good maternal characteristics.  A number of his descendants remain within the herd today.

Grange Orchid – also retained until her death at the age of 21 years of age, she produced a calf on an annual basis. She was flushed in 1986, producing 10 embryos to the renowned Funambule, resulting in seven heifer calves. These were retained, although five were sold over time to a number of leading pedigree herds.

Grange Triton – sold to MMB in 1983 (pre-cursor to Genus). Triton was the first UK Limousin bull to have semen exported worldwide and was one of the most widely used and highest ranking Limousin sires owned by Genus between 1984 and 1986.

Grange Gervaise – First ever UK bred Limousin to be sold and exported to France, January 2012. Sold to the leading ‘Les 4 Limousins’ consortium, which comprises EARL Lasternas, EARL Geraud and EARL Bonnet, who represent some of the leading French breeders in France.

Grange Tarashani – a daughter of Marquis (bred by GAEC Manaud-Giroux), who has great length, width of pelvis and has produced a number of daughters which have inherited these traits.

Grange Rialto – an exceptional female who sold for 18,500gns as a first calving heifer at the Grange on-farm sale in 2003.

Grange Davinia – by Perit-B, who was bred by the famed Domaine des Forges herd, she has an exceptional temperament and milking abilities and has consistently passed these traits on to her progeny. 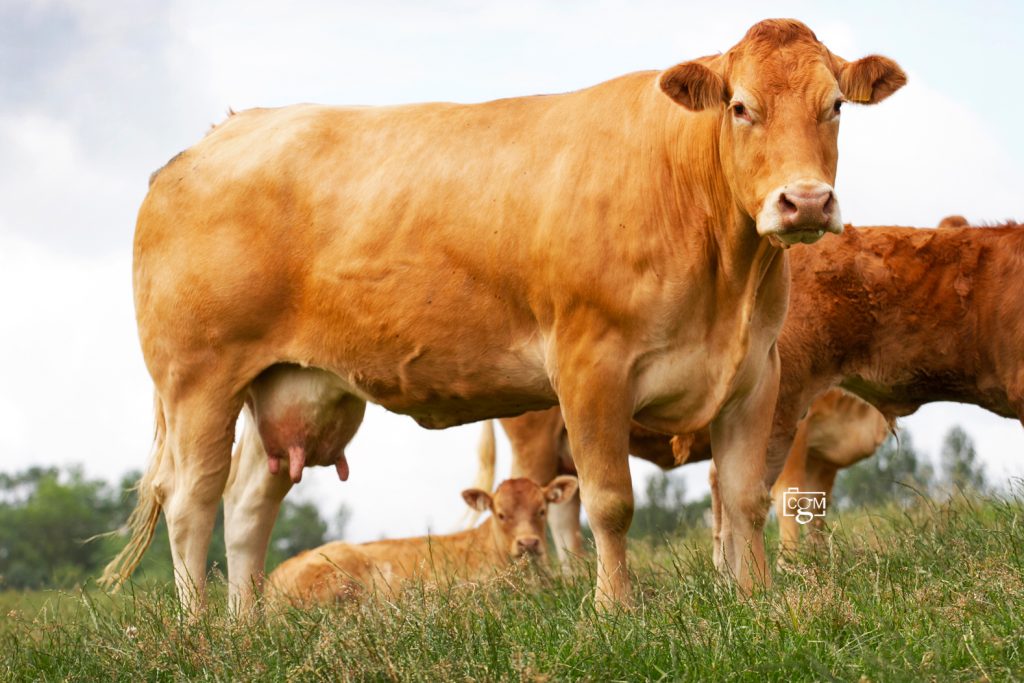 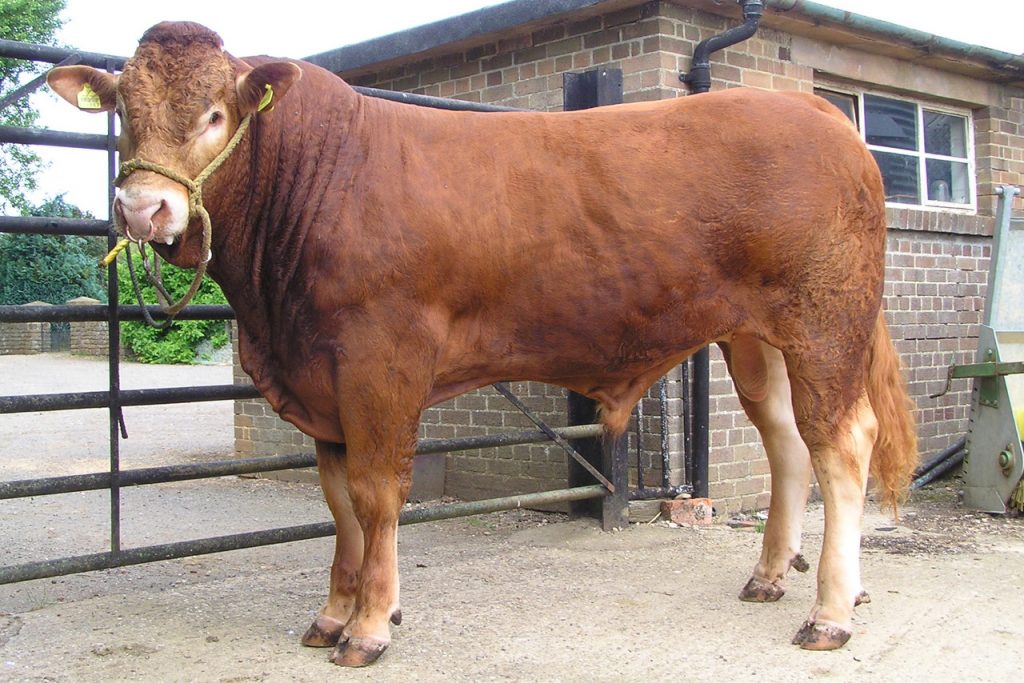 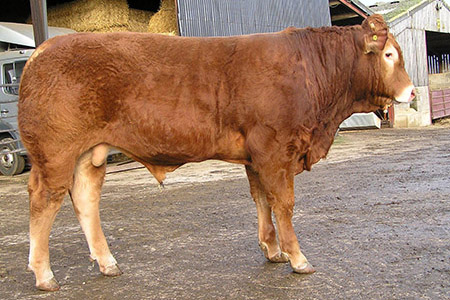 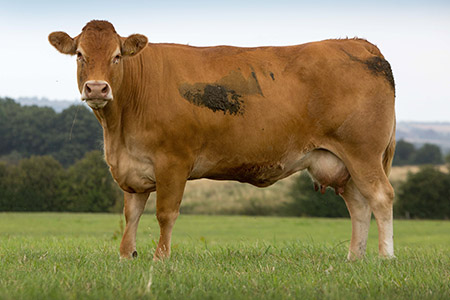 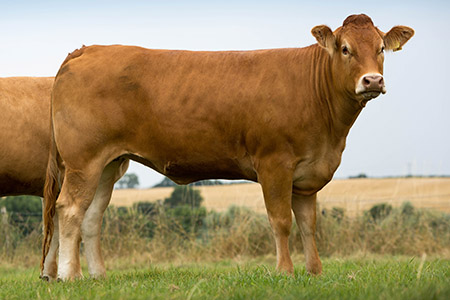 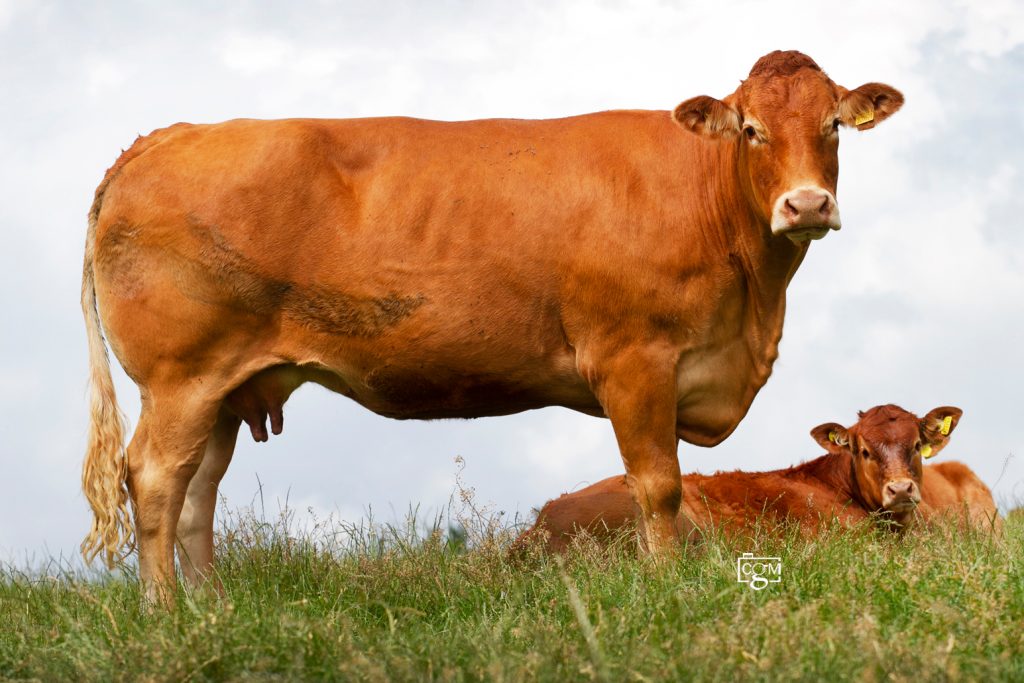 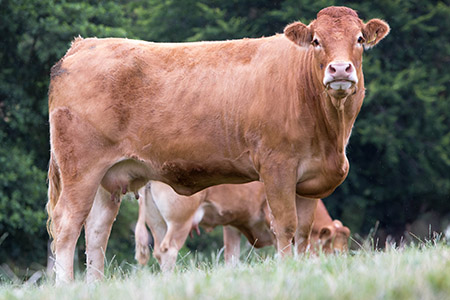 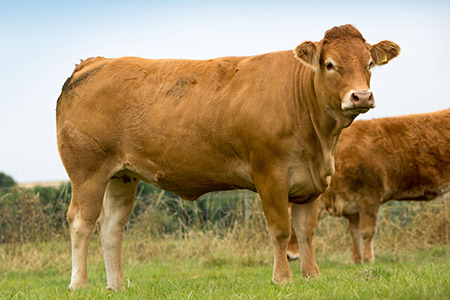 Bred by Dan Haak, the Uplands herd was among one of the best herds to be found in the UK to date. Within her pedigree, MMB Fanfaron can be found, who was again one of the first Limousins to be imported into the UK.

Grange Napiana – sold in the Grange on-farm sale in 2003 and exported to Northern Ireland as foundation stock for a newly formed Limousin herd. Napiana had an outstanding temperament (something in common with all Ocarina progeny) and consistently produced quality daughters.

Grange Bouvardia – exported as a maiden heifer to The Azores (the only export to take place to date for Limousins to The Azores).

Grange Seraphina – retained in the herd, she had conformation, breed characteristics, milking ability and a quiet temperament.  She produced a number of progeny who have inherited these traits and have been sold to both pedigree and commercial herds.

Grange Clematis – a Serge daughter (bred by GAEC Le Lann), which combines thickness and power from the sire with elegance and maternal characteristics from the mother, she had a great temperament, milking abilities and breed characteristics.

Grange Treviso – one of the first Perit-B sons born in the UK. He had length, stretch and easy calving characteristics and was sold to a leading pedigree herd as service sire where he was used for a number of years with great success.

Grange Babiole – sold at the 2011 on-farm sale with an outstanding Dolmen son at foot, who has gone on to be used within the Rectory herd of Messrs Greaves.

Grange Heptapleurum – This female above has length and growth, yet retains feminine qualities and breed characteristics.  With a wide pelvis, and good thickness of bone, she is a very easy calving female, breeding true to her pedigree. 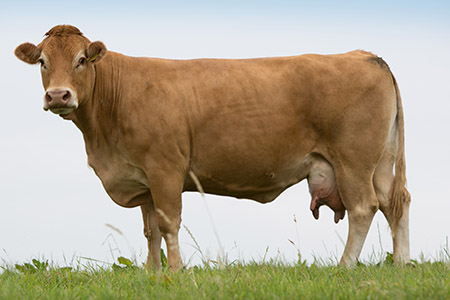 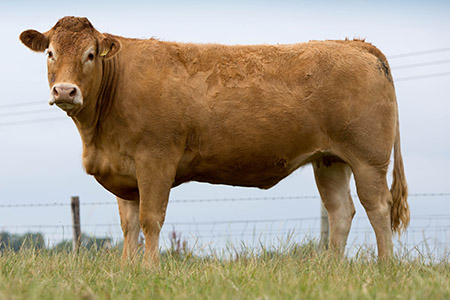 Bred by Mme de Blomac, she was purchased in 1977 and within her pedigree, the famed sire Bartissol can be found. She was a prolific breeder of females, most notably:

Grange Racquel – consistently produced progeny with conformation and milking abilities. A number of daughters were exported to Ireland, as well as some being included in the first British export of animals ever made to The USA in 1985.

Grange Mionia – sold at the on-farm sale held in 1999, she was one of the first Tanholm Claus daughters to be born in the UK (her sire being the renowned Danish bull, who sired numerous show champions).  Mionia combined greater thickness due to her sire’s bloodlines, yet retained growth from her mother’s genetics.

Grange Atlantis – a Funambule daughter who was exported to the USA in the second and final ever export made from the UK in 1986. Sold as a maiden heifer, she was specifically selected by the purchasers in order to obtain her mother’s bloodline.

Grange Gibralter – an elegant, feminine cow with stretch, growth and great milking abilities. She produced a number of daughters sharing these characteristics which went on to be sold to a number of pedigree breeders in the UK and Ireland.

Grange Hovenia–combined the bloodlines of Italienne with Uplands Dai (who included Ami, Prince and the famous show cow Senorita in his pedigree). 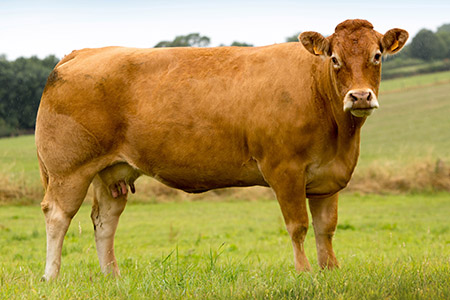 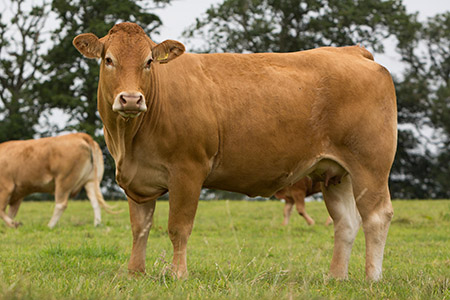 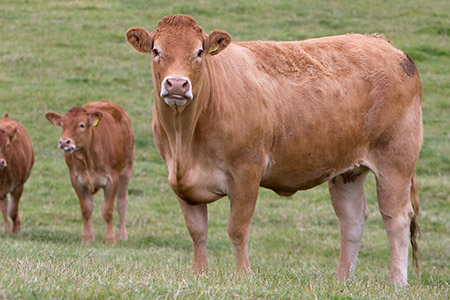 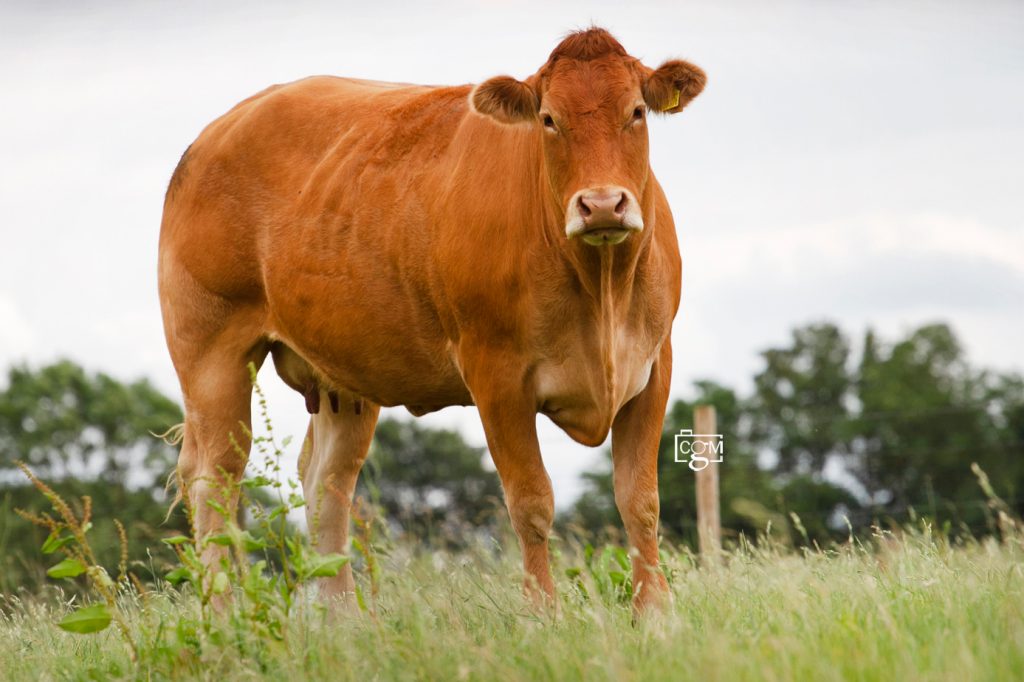 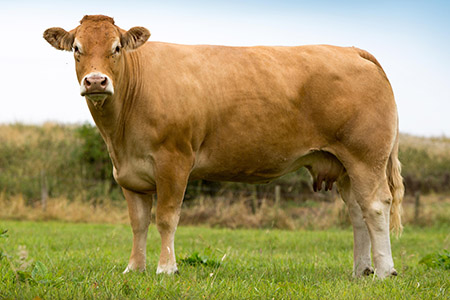 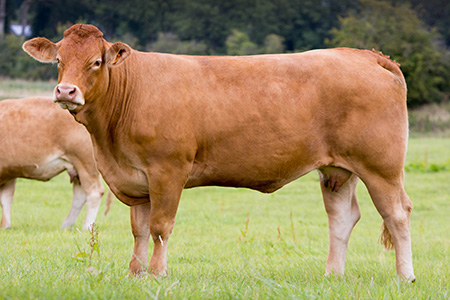 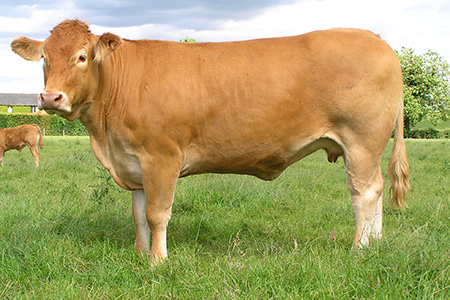 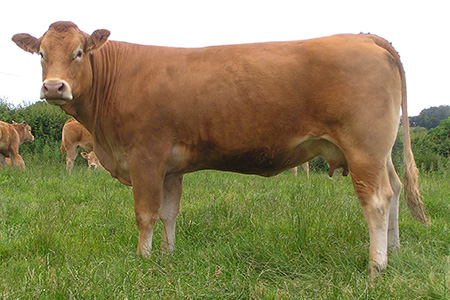